In November of 1944 the Adelaide Soaring Club (then known as the Gliding and Soaring Club of South Australia) was formed. Flying initially from an airstrip at Virginia this group of enthusiastic pilots quickly developed a tradition of soaring excellence and safety that has seen the club flourish for 60 years. From it’s inception the club has always strove to be at the leading edge of flight technology and club members have constructed a number of ground breaking aircraft. The S.A.5, the club’s first two seater, was an example of such a sailplane. Two seat trainers were not available at that time so to promote safer and more efficient pilot training, the ASC built the S.A.5 in 1946. The S.A.5 was ASC’s first two seat trainer.

The Adelaide Soaring Club moved to the Gawler Aerodrome in 1950. This airfield was constructed in 1941 by the Royal Australian Air Force and for a short period was used by No. 86 Squadron, flying P-40 Kittyhawk fighters.

After 1945 and until the construction of Adelaide Airport (at West Beach) this aerodrome was used by commercial aircraft as an alternative to Parafield when the latter was unserviceable due to bad weather.

Over the last half century the club has introduced thousands of people to the thrill of flight and trained hundreds of pilots. In the last decade alone we have conducted some 50,000 glider flights which represents 32,000 hours of soaring. This reflects the club’s promotion of enjoyable and safe flying. The club’s enthusiasm for the sport of gliding has also seen us host numerous state and national competitions and even a world championship.

In recent decades the club embraced powered ultra light flying, moving since 2009 to modern and larger Light Sport Aircraft with a fleet of Australian built Jabiru J170 series aircraft. and is now introducing hundreds of people to the thrill of powered flight.

The pic below shows Gawler Airfield prior to the building of the Northern Expressway, cica 2006. 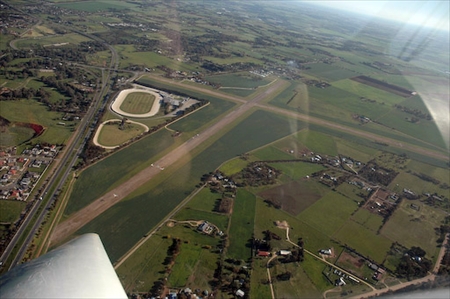